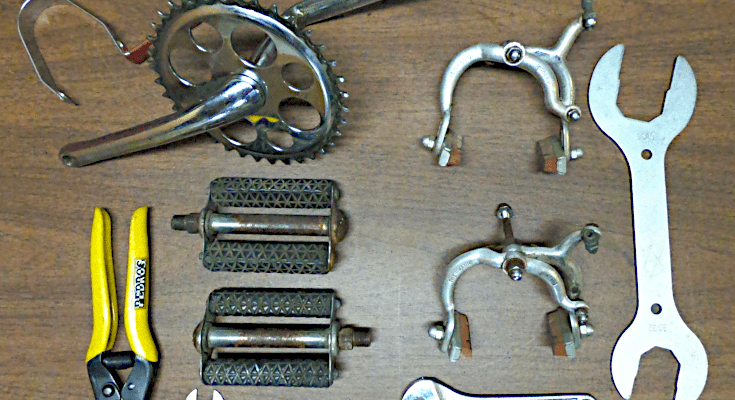 To perform a bike repair or to overhaul a bike by totally disassembling it down to the frame sounds like a daunting task, but it really isn’t as hard as it seems. You’ve already won the battle if you have room to work and the necessary tools.

Schwinn medium weight bikes, like the Schwinn bike I bought as a project, and heavy weight Schwinn bikes don’t require many tools for maintenance and repair. Most of the tools needed you may already have lying around the house. You will need the following tools:

Bike repairs are easier to do if you have a bicycle repair stand, but it isn’t a necessity. A level floor (preferably not carpeted) and some kind of table or other work surface for tools and parts is all you need.

If you don’t have a repair stand, leave the wheels, fenders, and front fork on the bike until you have all the other parts removed. Then remove the wheels and fenders. Remove the front forks last.

Not having a stand makes the work a little harder, but not impossible. I didn’t have a stand available while working on this bike, but I had a table large enough to put the frame on once the bike was disassembled.

Unfasten the master link from the chain and set it aside. Remove the chain from the bike.

Pedals come off the cranks by unscrewing the spindle next to the crank arm. The pedal on the right turns counter clockwise to remove, but the pedal on the left comes off by turning it clockwise. You may have to use a long wrench to get it loose as they tend to be very tight, especially on bikes that are heavily ridden. You may need a pedal wrench to break them loose.

Unscrew the locknut with a large crescent wrench by turning it clockwise. Remove the keyed washer that was behind the locknut. Unscrew the bearing cone clockwise. Reach in and pull the bearings out of the bottom bracket. They are held together by a retainer, so they will all come out together.

Now that the bike is totally disassembled, take a break, but not for too long. Now the parts cleaning and rust removal begins. This is also a good time to make a list of parts you will need to reassemble the bike. 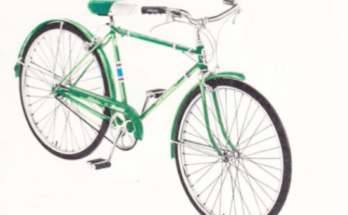